LGBT Info
Register
Don't have an account?
Sign In
in: Articles with too few wikilinks, 1964 births, People from Brazil,
and 4 more

Back to page
View source 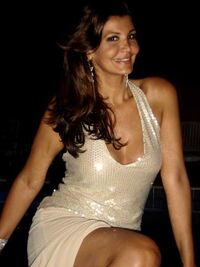 Roberta Close was born Luiz Roberto Gambine Moreira in Rio de Janeiro on 7 December 1964. She was born biologically male. Close, the first pre-operative transsexual model to have posed for the Brazilian edition of Playboy, is probably Brazil's most famous transsexual woman: today, her name is almost synonymous with sex change.

As an adolescent, Luíz began to adopt feminine attire and secretly began taking female hormone injections. By the age of seventeen, Close's career as a model and actress was beginning to take off. For a period of time, Luíz was associated with the travestis, a Brazilian subculture of biologically male transgendered prostitutes.

Close won the "Miss Gay Brazil" beauty pageant at the age of twenty. That same year, she made headlines and was dubbed "The world's most beautiful model". She has played a cabaret singer on a popular soap opera, starred in the 1986 movie Si tu vas a Rio... tu meurs, hosted a late night talk show, and was the inspiration for a hit song by Roberto and Erasmo Carlos.

In 1989, Close underwent sex reassignment surgery at Charing Cross Clinic in London, England. Afterwards, she appeared in an extensive photo spread in the Brazilian men's magazine Sexy, and was subsequently voted the "Most Beautiful Woman in Brazil."

In 1993, Close married Roland Granacher. The wedding to her Swiss husband took place in Europe, as it would not have been legal in Brazil. Close lived with Granacher in Zurich and Paris until the pair separated in 2000.

Roberta's Portuguese-language autobiography, Muito Prazer, Roberta Close ("Much Pleasure, Roberta Close" or "Pleased to meet you, I'm Roberta Close") was published in 1998. In it, she claims to have been involved with numerous American celebrities including Eddie Murphy, George Clooney, and Robert DeNiro. It has not been published in the United States.

Close was involved in a lengthy legal judicial battle to challenge the Brazilian laws which prevented her from declaring her sex as female on official documents. In 1997, the Brazilian Supreme Court ruled against her. Flávio Giron, the federal vice-prosecutor, argued that "the expert exams carried out have confirmed the male sexuality of the petitioner." On March 4, 2005, Roberta Close acquired legal status as a female in Brazil after Judge Leise Rodrigues de Lima Espiritu Santo of the 9th Family Court of Rio de Janeiro legally recognized Close as a woman. Close's lawyer, Leandro Paiva de Medeiros, said, "In the decision, the judge affirms that Roberta has been a woman from the time she was born; it was only that medical science in 1964 was not capable of identifying this, due to a physical problem that she had." She was issued a new birth certificate by the Office of Public Records of the 4th district of Rio de Janeiro, which states that on December 7, 1964, a child of the female sex was born and was given the name of Roberta Gambine Moreira.[1]