Back to page
View source

Marsha P. Johnson (1945 - July 6, 1992) was an African American American gay liberation activist and self-identified drag queen, and a popular figure in New York City's gay and art scene from the 1960s to the 1990s.

One of the city's oldest and best known drag queens, Johnson participated in clashes with the police amid the Stonewall Riots. He was a co-founder, along with Sylvia Rivera, of Street Transvestite Action Revolutionaries (S.T.A.R.) in the early 1970s. He also was the "mother" of S.T.A.R. House along with Sylvia, getting together food and clothing to help support the young queens living in the house on the lower East Side of New York.

Once, appearing in a court the judge asked Marsha, "What does the 'P' stand for?", Johnson gave his customary response "Pay it No Mind." This phrase became her trademark. In 1974 Marsha P. Johnson was photographed by famed artist Andy Warhol, as part of a "ladies and gentlemen" series of polaroids featuring drag queens. An interview with Marsha P. Johnson by gay activist Allen Young can be found in the book "Out of the Closets: Voices of Gay Liberation," originally published in 1972 and available in a new edition from New York University Press.

In July 1992, Johnson's body was found floating in the Hudson River off the West Village Piers shortly after the 1992 Pride March. Police ruled the death a suicide. Johnson friends and supporters said he was not suicidal, and a people's postering campaign later declared that Johnson had earlier been harassed near the spot where his body was found. Attempts to get the police to investigate the cause of death were unsuccessful.

This article is a stub. You can help by expanding it. 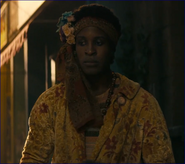