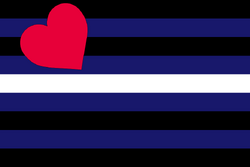 The Leather Pride Flag is a symbol used by the leather subculture since the 1990s. It was designed by Tony DeBlase in 1989, and was quickly embraced by the gay Leather community.[1] It has since become associated with Leather in general and also with related groups.

The flag was designed by Tony DeBlase. He first presented the design at the International Mr. Leather event in Chicago, Illinois, U.S. on May 28, 1989.[2]

Initial reaction to the flag was mixed. According to DeBlase's article A Leather Pride Flag,

"Some, particularly on the east coast, reacted positively to the concept, but were quite concerned, some even offended, that I had not involved the community in helping to create the design."[3]

The original flag is on display at the Leather Archives and Museum.

Creator DeBlase consistently[citation needed] refused to explain explain the colors and design, insisting that each person could do that for themselves.

"The flag is composed of nine horizontal stripes of equal width. From the top and from the bottom, the stripes alternate black and royal blue. The central stripe is white. In the upper left quadrant of the flag is a large red heart. I will leave it to the viewer to interpret the colors and symbols."[4]

Although DeBlase is quoted as saying the design is copyrighted, there is no formal copyright filing under his name at the U.S. Copyright Office's searchable online records.[5] However, United States Copyright Law does not necessarily require registration in order to ensure protection.[6] Under the doctrine of laches, however, inaction by DeBlase to protect his purported copyright would negate future copyright claims.

Deutsch
Community content is available under CC-BY-SA unless otherwise noted.