LGBT Info
Register
Don't have an account?
Sign In
in: 1958 births, American people of Italian descent, Comedians,
and 8 more 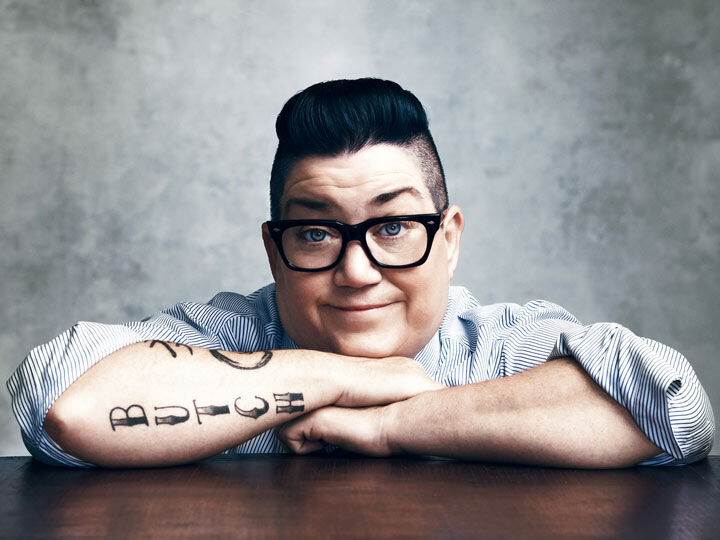 Lea DeLaria (born May 23, 1958) is an American comedian, actress, and jazz musician.[1][2][3] The "famously controversial" DeLaria was "the first openly gay comic to break the late-night talk-show barrier" with her 1993 appearance on The Arsenio Hall Show.[4]

DeLaria was born in Belleville, Illinois,[1][2] the daughter of Jerry Jean (Cox), a homemaker, and Robert George DeLaria, a jazz pianist and social worker.[2][5] Her paternal grandparents were Italian.[3] She attended kindergarten through 8th grade at St Mary's Elementary School in Belleville, and has referenced her Catholic upbringing in her performances.

Of her watershed 1993 appearance on The Arsenio Hall Show, as the first openly gay comic to appear on a late-night talk-show, DeLaria said "It's the 1990s ... It's hip to be queer, and I'm a bi-i-i-i-ig dyke!" In December 1993 she hosted Comedy Central's Out There, the first all-gay stand-up comedy special.[4]

DeLaria is also known for her touring "musical comedy about perverts," Dos Lesbos (1987–1989) as well as Girl Friday, a comedy she conceived, wrote, directed and starred in, and which won the 1989 Golden Gull for Best Comedy Group in Provincetown, Massachusetts.[6]

DeLaria has released two CD recordings of her comedy, Bulldyke in a China Shop (1994) and Box Lunch (1997). She has also written a humorous book entitled Lea's Book of Rules for the World.

DeLaria appeared as Jane in the 1998 Off Broadway production of Paul Rudnick's The Most Fabulous Story Ever Told, "a gay retelling of the Bible."[7] Entertainment Weekly said "a star is born with Lea DeLaria" of her "showstopping" performance as Hildy Esterhazy in the 1998 Broadway revival of On the Town.[8][9][10] DeLaria subsequently played Eddie and Dr. Scott in the 2000 Broadway revival of The Rocky Horror Show, and can be heard on the cast recording.[11]

DeLaria has also appeared in a number of films, including Edge of Seventeen and The First Wives Club.

DeLaria integrates musical performance into her stand-up comedy, focusing on traditional and modern be-bop jazz. She has even said at her shows "It is my personal goal to bring be-bop jazz back into the gay and lesbian community." In 2001 she released a CD of jazz standards called Play It Cool. This was followed by the album Double Standards in 2003,[12][13] and by The Very Best of Lea DeLaria in 2008.

In 2001, DeLaria was the voice of Helga Phugly on the short-lived, animated sitcom, The Oblongs. In 1999 DeLaria played the recurring role of Madame Delphina on the ABC soap opera One Life to Live, returning in 2008 as both Delphina and Professor Delbert Fina. She continued to portray Delphina on a recurring basis until 2011.[14]

In 2008, Warner Records released The Live Smoke Sessions, DeLaria's first recording focused on "timeless pop standards" such as "Down With Love," "Night and Day," "Love Me or Leave Me" and "Come Rain or Come Shine." She noted, "I styled this CD on the old school live recordings ... It is my hope that this CD will take you back to 1948 and the Village Vanguard. So please let me invite you to mix a cocktail and enjoy a smoke while you sit back and soak up the swing."[15]

In November 2008, DeLaria completed a tour of Australia, playing Sydney, Melbourne, Adelaide and Brisbane. She also frequently collaborates with comedian Maggie Cassella, most notably on an annual Christmas cabaret show in Toronto, Ontario which also sometimes tours to several other Canadian and US cities.

In July 2010, DeLaria's version of "All That Jazz" was used on So You Think You Can Dance. DeLaria is currently performing in Prometheus Bound at The American Repertory Theater in Cambridge, Massachusetts.

Since 2013, she has appeared in the Netflix Original Orange Is the New Black as the recurring character prison inmate Carrie 'Big Boo' Black.

On February 14, 2015, DeLaria received the Equality Illinois Freedom Award for her work as "a cutting-edge performer who has used her talent to entertain and enlighten millions of Americans,” said Bernard Cherkasov, CEO of Equality Illinois. On receiving the award at the 2015 Equality Illinois Gala in Chicago, DeLaria said, “As an out performer for over 33 years who has made it her life’s work to change peoples perception of butch, queer and LGBT, it is an honor for me to receive such recognition from my home state. I feel I’m doing Belleville proud. Go Maroons!”[16][17][18]