Buttercup Utonium is the tritagonist of the animated television series The Powerpuff Girls, along with her sisters Blossom and Bubbles. She's the Toughest Fighter; she's the bravest, most headstrong of the superhero trio.

Not shown, but had a crush on Ace

The girls are on a field trip to the museum when they see the gang smashing exhibits to get into a soda machine. Blossom and Bubbles fly straight away to beat them up. Ace, who had escaped from the girls' sight, makes his way to Buttercup (who had stepped back from the fight) and convinces her that the gang just wanted a soda and that the girls are being too rough with them. Buttercup saves the other Gangreen Gang members from her sisters by hiding them under a carpet. As the gang leaves, Buttercup gives Ace a soda, and Ace tells her she can hang out with them anytime she wants in return.

That evening, while her sisters are asleep, Buttercup flies to the junkyard where the gang's shack is located. Snake screams at her, saying that she should not be in their hideout, but Buttercup punches him in the nose (just like Ace does often when Snake speaks out of line). That morning, Buttercup leaves after accepting to come back again that night. The gang (except Ace) spend a long time saying goodbyes to her until she is totally out of sight. Ace then berates the gang and tells them she is not their friend but in fact a tool to help them control Townsville.

Buttercup returns to the gang's hideout as promised, but finds Ace to be the only one there. The four other Gangreens call the Powerpuff Girls, and Grubber imitates Buttercup's voice to fool Blossom and Bubbles into believing that Buttercup is stuck at the city dump.

The Powerpuff Girls are cleaning out their closet when Buttercup finds her old lucky blanket. Buttercup remembers when they sped up time and aged themselves into teenagers, and during their time as teenagers, the sisters had chosen to give up their crime-fighting lifestyles and live like normal teenagers--this included things like becoming more interested in fashion, wearing makeup and spending their free time hanging out at the mall. And it was at the Townsville Mall that they met the teen Rowdyruff Boys and organized a triple date with them. While the girls and the boys were organizing their date, chaos struck Townsville as crooks and monsters attacked it with no one to stop them. 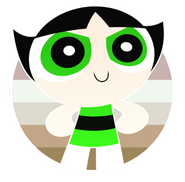